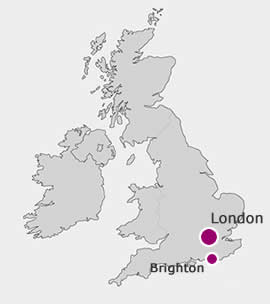 Our school in the young and vibrant city of Brighton may have everything you’re looking for. When you arrive at Brighton school, you will join a small and friendly community of students who will encourage you to reach the highest level in your English language learning.

Studying in a beautiful building in a historic area of the city, you will also have the energy and excitement of Brighton on your doorstep. So, whether you want to eat fish and chips on the beach, go on a rollercoaster on the pier or relax to some live music, Brighton has it all to offer.

Brighton is one of the biggest tourist destinations in the south of England, especially for Londoners , who see this city as an ideal location for rest and leisure by the sea. It was the preferred location for the English aristocracy to spend their holiday periods and it still retains many palaces and museums in the Victorian style.

Today it is a modern and cosmopolitan city and probably the most beautiful and lively seaside town in England . Due to its geographical location the weather is usually good , almost "tropical" climate, palm trees and boardwalks that remind you of any southernmost city in Europe.
The intense nightlife has a solid reputation and this is due to the presence of many young people who come to study in two prestigious universities, with numerous influxes of foreign students all year and every year .

Brighton is not very big but it is made of many streets, so the best option is to use public transport or take a taxi. Without a doubt the best means of transport is the bus as there are regular and prompt services that take you anywhere in the city. The bus company that serves the town is called Brighton & Hove .

At the end of the eighteenth century , the British royal family chose the city of Brighton for their summer residence
It is one of the most visited coastal places in England . Its population of about 120,000 inhabitants doubles during the summers.
The city receives more than 8 million tourists, most of them from the United Kingdom .
Among the many residents of Brighton, it is the birthplace of filmmaker Richard Attenborough, politican Sir Winston Churchill ( studied at Brighton) , the writer Rudyard Kipling , actress Vivian Leigh or Emperor Napoleon III of France, who was temporarily exiled in Brighton after being dethroned.
The capital London is just 50 minutes by train.
Brighton is the capital of the gay movement in the UK

And at night for students in Brighton?

The march in Brighton is famous and is surpassed only by the one in London.
In the center of town and along the seafront there are over 150 bars, each with Victorian charm; from small halls and churches transformed into bars, to pubs largely based on a specific theme. There are definitely places for all tastes and in the summer, there are music festivals on the beaches .

If what you want is somewhere quieter, you can go to a Lounge Bar
But Brighton is famous for its nightlife and there are usually not many quiet places to go at the weekend. Many bars serve very good meals , others offer live music , some even have karaoke ; and all serve excellent beer. Of course , if you are old enough.
Some bars even have their own beer factory adjacent  ( The Evening Star, The Hand in Hand, and The Hedgehog and Hogshead ) . The breweries are more locally renowned " King and Barnes and Harveys " in Lewes, and also " Spinnaker Ales " in Lancing. The objective of the course is to develop all of the main language skills, gain fluency and confidence when increasing your vocabulary, improving grammar, improving written work and strengthen reading skills.

The methodology has a very communicative focus, motivating the students to speak from the first day.

Ideal for those that want to spend time both studying and enjoying their free time visiting the city and sightseeing.

The use of interactive whiteboards is an integral part of teaching and offers opportunities to advance learning. Your progress and achievements will be supervised throughout. Every 2 weeks you can take advantage of the tutorial service with the teachers, re-do level tests and revise.

The objective of the course is to develop all the main language skills, gain fluency and confidence when improving your vocabulary, improving grammar, improving written work and strengthening reading skills.

The methodology has a communicative focus, motivating the students to speak from the first day.

Ideal for those that want to spend time studying and enjoying their free time by visiting the city and sightseeing.

The use of interactive whiteboards is an integral part of teaching and offers opportunities to advance learning. Your progress and achievements will be supervised throughout. Every 2 weeks you can take advantage of the tutorial service with the teachers, re-do level tests and revise.

Ideal for those that want to make the most of their stay with extra classes in the afternoons.

The use of interactive whiteboards is an integral part of the teaching and offers opportunities to promote learning.

Ideal for those that want to improve their English level quickly

You will have classes in the morning and afternoon, in total 6 hours per day.

The IELTS exam is quickly becoming the leading English test worldwide, and the English ability test for admissions to university in the UK.

Ideal for students that want to improve their level to pass the IELTS.

The objective of the course is to provide skills and necessary strategies to pass the IELTS exam with success. During the course you will do tests and practice every skill in similar conditions to the exam. In the school they will help you with all the paperwork to register. Every week the school organizes a varied plan of activities. Participating in activities is a perfect way to make new friends, explore the city and its surroundings. Terrie´s student house can be found in the centre of Hove, a 15 minute walk from the school. It offeres single or double bedrooms. Bathrooms and kitchen are shared. All of the bedrooms are very light and have been renovated very recently.

There is a daily cleaning service in the common areas, and they change the sheets once a week. Wifi connection available.

We offer single or double rooms, half board (breakfast and dinner daily), or just breakfast.

There are also single bedrooms available with ensuite.

Most of our host families live in the suburbs of the city with good public transport links to the school.

This new residence is situatied a few steps away from Churchill Sqaure, the main shopping area. The bedrooms are fully furnished to a high standard. The residence can be found close to a large variety of shops, cafes, bars, discos, cinemas and big supermarkets. The beach is a 10 minute walk away.

There are excellent transport connections with the rest of the city, and this accommodation can be found a few steps from Brighton station with regular trains to London.

To get to Brighton, you will need to book a flight to London .

London has two major airports, " Heathrow " in the West and " Gatwick " in the South . Both airports are well connected to the transport system of the city.

If you get to " Gatwick " ( LGW), you can take the commuter train to Brighton , which goes directly to the South Terminal .
Learn more about these trains on the web: www.nationalrail.co.uk . The trip takes 35 minutes. The approximate price of the ticket is 7.20 Pounds .
There is a free train service , " Transit train" , which connects the North and South terminals of Gatwick Airport, which operates 24 hours a day.

If you arrive at Heathrow Airport ( LHR ) you must take the National Express Airport Bus, www.nationalexpress.com .
This bus takes you to Brighton ; every 30 minutes from the Central Bus Station (central bus station ) in Terminals 1, 2 and 3.
The trip takes 2 hours. The price of the journey is approximately £ 16 each way ; if you buy a return ticket, it will cost you about £ 24 .