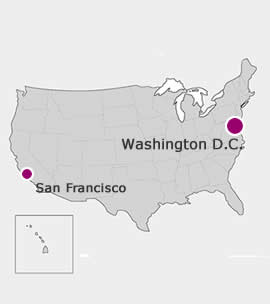 The school of San Francisco is very well located, near Market Street, in the heart of the city. You're just one step away from Union Square and the school is on the eighteenth floor of an important building on Montgomery Street, where students study English and make lifelong friendships with classmates from around the world. The academic center has large classrooms with the latest interactive technology. There is an excellent mix of nationalities in the school.

Accreditation: The school is accreditad by English USA

San Francisco is a city that moves at its own pace. Founded in 1776 and developed by the gold rush, today it is one of the most important tourist destinations in the United States. The city is famous for its steep streets that seem like true roller coasters. Despite the slopes, it is one of the most walkable cities in the world and is full of parks, recreation areas and bike lanes.

San Francisco is considered the best city in America: a town of free spirits, easygoing, open, multicultural, dynamic and unforgettable.

For its lifestyle, San Francisco is one of the favourite destinations for students because it is the perfect place to live, study and explore American culture. Its irresistible charm captivates all who visit.

Things to see and do in San Francisco

Moving around the city

The city of San Francisco has one of the best public transport networks in the United States, which will be of great help when you travel. Additionally, many forms of transport cover the same routes.
The transport authority of the city is San Francisco Municipal Railway - Muni website: http://www.sfmuni.com responsible for trams, buses and light rail.

Buses and trams operate the same routes and the rates are equal.

Districts and neighbourhoods in San Francisco

At night in San Francisco

The nightlife in San Francisco is active and bustling. The bars and restaurants are full from early on until very late. There are more than 2,000 places where you can have a drink, so being thirsty will not be a problem. The opening hours and dress code varies from bar to bar, but in general, the attitude is quite relaxed. San Francisco has many entertainment areas and nightlife for all tastes. The neighbourhoods with the most atmosphere are: Downtown, South of Market (SoMa) and Castro.

Generally, the restaurants, clubs and bars can serve alcohol until 02:00. The minimum drinking age is 21. They will always ask for ID to get into bars. Smoking is not allowed. This English course will help you to improve your English knowledge and improve your fluency in daily life contexts. It is ideal for students that want to feel more confident and it is focused on the 4 main aspects of language: speaking, listening, reading and writing.

Visa is NOT required 15 hours per week

This English course will help you to improve your English knowledge and to improve your fluency in daily life contexts. Also, there are 4 extra optional hours which can be personalised to your weak areas.

This English course will help you improve your English knowledge and improve fluency in daily life contexts. Also, there are 10 hours of optional extra classes which can be personalised to your weak areas. It is ideal for students who want to feel more confident, and is focused around the 4 main aspects of language: speaking, listening, reading and writing,

This course is ideal for those that want to focus on their professional future in an international environment. This intensive Business course focuses on developing fluency, precision and communication skills that are needed for an international working context. Every week there will be 20 general English lessons and 10 English lessons focused on business. It is the best scheme for your curriculum. What to do in San Francisco

The school organises a varied plan of activities for your English course. Participating in activities is not mandatory, however it is a perfect way to practice your English, get to know the city and make new friends. Staying with a local family is a great way to learn more about American culture while enjoying the comforts of home. You will live as they live, eat what they eat, and practice English with them when you are home. San Francisco is a bustling and diverse city with 800,000 inhabitants. There is no majority ethnic group and the population includes large percentages of Asian and Hispanic ethnic groups. Our host families reflect this diversity and include singles, couples and single parents. All families are English speaking and are happy to share the diversity of San Francisco with international visitors. Students who choose homestay often feel that their English improves more rapidly when talking every day with their host families. Accommodation with families offer a safe and friendly environment, along with a fantastic quality / price ratio.
Families live in the city of San Francisco or in the nearby cities of Daly City and South San Francisco. Most families live in neighbourhoods Bernal Heights, Glen Park, Inner and Outer Richmond, Inner and Outer Sunset, St. Francis Wood, Excelsior, Castro and Mission.

Getting to San Francisco

The San Francisco International Airport is located 23 km (14 miles) south of the city.

Companies that fly to San Francisco from Spain are: