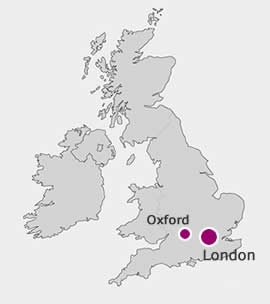 Our English school in Oxford is situated in a quiet and spacious building in the centre of Oxford, a few metres from the main shopping streets and from the cultural and tourist centres of the city. These include the University Colleges, Museums, Art galleries, Historical buildings, the river, bars, clubs and pubs.

Through the windows of the school, you will enjoy spectacular views of the roofs of Oxford, Carfax Tower, the Cathedral, and the beautiful surrounding landscapes. The bus stations, urban and national, and train stations can be found a few minutes walk from the school.

In the summer months, some of the classes will take place at the Secondary School, located a 10 minute walk from the main building.

Facilities in the school

Oxford, located in the centre of England, just 90km from London, is known worldwide for being home to the oldest English speaking University, Oxford University, which is also one of the most prestigious academic centres in the world. This famous University has always attracted students and visitors from all around the world. Amongst its students are Kings, Nobel Prizes or presidents, and its old classrooms have been used for filming many famous films.

However, this old city isn´t just an academic city, but also has an important historical and cultural heritage. Amongst many of the wonders, you will discover its beautiful architecture with its romantic spires and hidden away University Colleges. Its cultural environment is traditional and modern: theatres, comedy clubs and nightlife, pubs and live music ranging from indie rock to jazz, chamber music to orchestral. Oxford knows how to perfectly combine tradition and modernity.

Close to Oxford is the excellent University student city. Studying English in Oxford means studying in probably the most symbolic place in the word. In its streets and buildings there are such respectful traces of the past, one has the impression that the echoes resonate from many generations of students that have studied here in the previous centuries. Doing an English course in Oxford is a unique experience.

Things to see and do in Oxford

Leisure after the English classes in Oxford

Getting around Oxford - public transport

It is very easy to get around in Oxford. The 2 main bus companies are Oxford Bus Company and Stagecoach. There are many stops and all areas of the city are well connected.

Oxford is a student city, and the most used transport method is by bike. The historical centre can be toured just by bike since cars are prohibited and there are many lanes.

Oxford, being a Univeristy city, has varied leisure options, from traditional British pubs to modern clubs. At night, there are bars, cafes and pubs full of people, mainly young people and university students, and many international students from the English course can make the most of this at any time. Cowley road is very popular with the students: there are many pubs and clubs. In the city centre, there are a lot of pubs and clubs for every taste, with surprising musical offerings. Visit the Bear, open since 1242, continues to be as popular as we suppose it was 800 years ago.

Cost of living in Oxford

Travelling around Oxford by bus costs £7 per week.

£30 or £40 should be enough to eat and to do things, but if you want to visit other cities and go out most nights, you will need more money.

Students that want to combine their studies with their free time.

The objective of the course is to help the students to communicate effectively, and in an appropriate manner in diverse situations, expressing their ideas and opinions with precision and clarity. To be able to understand diferent situations and registers, speaking and writing with precision and in a variety of different styles, situations and registers. To help you to do this, the classes focus on all of the aspects of the language: you will learn how to use vocabulary, grammar, and how to improve your language skills.

Two breaks: one of 30 minutes, and the other 15 minutes

The structure of the intensive course is the same as the standard course. It includes 5 more lessons each week.

Breaks during class: one of 30 minutes and the other 15 minutes

The structure of the course is the same as the standard course. The number of hours of classes change every week. In this case, there are 6 lessons per day.

Preparation course for IELTS or Cambridge FCE, CAE, CPE - in the mornings

Starting dates for the 2016 course:

Students that need to prepare for the Cambridge exams

The preparation course at the Oxford school is very successful. Approximately 90% of the students have passed their exams since the beginning of 2005.

Preparation course for IELTS or Cambridge FCE, CAE, CPE - in the mornings

Starting dates for the 2016 course:

Students that need to prepare for the Cambridge exams

The preparation course at the Oxford school is very successful. Approximately 90% of the students have passed their exams since the beginning of 2005. Every week and especially in  the summer, the school organises a varied programme of cultural activites. Nearly every afternoon, evening and weekend the school organises excursions, trips, tours and various events. Participating in the activities is the perfect way to get to know the city and the surroundings, whilst also making new friends.

During the weekends, we organise full day trips.

Every Saturday we organise full day trips with a private coach. During your stay, you will visit:

​During the summer, we also organise half day trips to Blenheim Palace, Las Rozas Village and the BMW Factory (home to Mini) Living with a native family during your stay in Oxford is ideal for students that want to submerge themselves in a different culture. Sharing food with your hosts every day, you will have the opportunity to get to know the British culture and practice your English. The majority of the families live in residential areas in the city. To get to the school you will have to get public transport, and it can take 10-30 minutes.

Our families are all very different. Your hosts can be natives or families that moved to the UK many years ago, single people, married or retired people. All of the families are carefully selected and are inspected regularly, to ensure that they comply with the quality criteria of the British Council.

Accommodation in families includes breakfast and supper from Monday to Friday, and food throughout the weekends.

Double bedrooms are available only for students that travel together.

Remember that the first Sunday you should arrive at the families house before 23:00

The summer residence is very close to the University Campus of Headington, and close to Oxford Brookes University; it is very well connected with the city centre through public transport.

The residence is made up of shared aparments of 6 people. All of the bedrooms are singles. The kitchen, living room and the two bathrooms are shared with the other students.

The school is 15-20 minutes away by bus. There is a security service 24 hours a day.

There are washing machines and dryers available for students - you need to pay for this service. There isn´t a cleaning service during the stay. The students will be responsible for cleaning their apartments. There is no internet connection.

Availability: Only summer - July and August

How to get to Oxford

Getting to Oxford from London airports. The best option is to get to Victoria Station (London) and from here, you can get a direct bus to Oxford.

Oxford Tube has a service from Victoria, Marble Arch, Notting Hill Gate, Shepherd´s Bush and Hillingdon, in London, to the centre of Oxford.

The X90 bus connects Victoria train and bus station in London to the centre of Oxford. The same company operates the bus service Airport Express, from Heathrow or Gatwick.

From Paddington Station in London, there are trains to Oxford - it takes 50 minutes.