The school of German language in Munich

The school in Munich is close to the central railway station, just a few minutes from the busiest square in the city.

In the middle of the 18th century, the Karlsplatz in Munich (Stachus) was the busiest square in all of Europe. And although nowadays cars do not circulate for her, the Stachus, as the locals call it, is still the busiest square in the city. Here begins the main shopping street, full of shops and huge shopping centers.

Throughout its two floors you will find everything you can ask for at a modern study center: classrooms full of light, a modern multimedia classroom, a large terrace and a cozy cafeteria.

Idyllically located at the foot of the Alps, Munich, is the capital of Bavaria, has 1.2 million inhabitants.

Munich satisfies all the tastes: sports in the Olympic facilities or spectacular football matches, exhibitions in museums or galleries, theaters, cinemas and international film festivals, fashion, concerts ranging from classical music to techno music, disco and much more.

In summer, you can sit on the famous terraces called "bier garten", swim in one of its many lakes located in or around Munich or take a day trip to Neuschwanstein Castle, the famous fairytale castle of King Ludwig II. 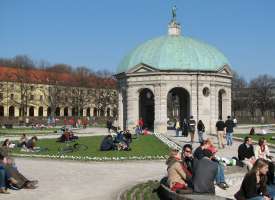 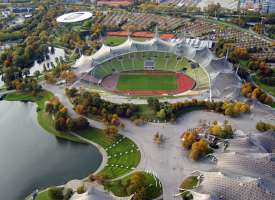 The residence course will be an ideal choice for you if you want to spend as much time as possible with your fellow students and if you’re looking forward to afternoons full of activity and sports. You are going to stay in a residence for young people that will be reserved for you and your course mates. Our staff will look after you 24 hour a day and make sure that you feel at home.

By having 24 hours per week, you will learn the language even better and faster.

The course includes a full program of activities in the afternoon and evening. The activities are the ideal option for students to get to know each other and practice German in a more relaxed and fun environment.

This is an example of the activities carried out in a week:

The residence in Munich is only 6 metro stops from Marienplatz, which is one of the city's central points: tourist attractions and numerous businesses can be reached in 10 minutes. There is no easier way to discover the wonders of the Bavarian capital.

It is located in the same complex as the school, so students will not to take public transportation to attend class.

The residence not only has very good public transport connections, but also offers a wide variety of services, such as free wi-fi and also American pool and foosball tables.

The rooms have shower and private bathroom, cleaning service and WiFi.

School distance: close to the school