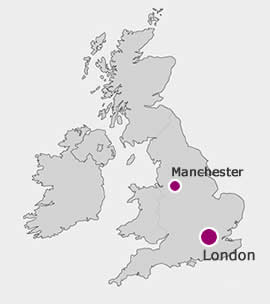 The school was founded in 2011 as a private college and was accredited by various accreditation bodies. The College is located in the very heart of Manchester near many shops, cafes, restaurants and hotels. We are a short walk from Piccadilly Gardens, China Town, and Manchester Central Library, along with Piccadilly train station, and major tram and bus links.

The teachers are qualified. All of our staff are very approachable and students therefore feel at ease. Many of our teachers have lived abroad so they understand the needs of foreign students. From the first day, students will be met by our friendly receptionists along with the welfare team in order to attend to your needs.

IT Suite and Library:  Our students have access to a self-study IT suite where they can chat with their friends and family online, check e-mails, and conduct research related to their study. The library is a great place for studying, picking up classic English literature, looking through course books, magazines, newspapers, Business and Management related articles, and Tourism and Hospitality management books.

Classrooms: There are 10 well-equipped classrooms, varying in size in order to accommodate students’ needs and learning requirements. Interactive White Boards are provided. In the classrooms there is natural light from the large windows.

Prayer Room: which is available to all students of all faiths.

Student Lounge: where you can relax and chat with your friends. The lounge has a TV, football table along with hot and cold drink and snack machines.

Manchester is one of the biggest cities in England. Here the football, shopping, Univeristies and architecture have a special importance.

Although it isn´t considered one of the biggest tourist destinations of the country, its impressive Victorian architecture, the birthplace of the railway and Rolls Royce amongst other things, it warrants a visit.

It has always been considered an industrial city, but nowadays the nightlife is one of the liveliest in England. Don´t miss the Urbis exhibition center, the live performances at The Social restaurant, a visit to Old Trafford and its Red cafe, as well as the nightlife atmosphere in the Student Quarter.

Things to see and do in Manchester

The centre of Manchester is quite easy to get around on foot. For areas outside the city centre, you can use the extensive public transport network.

Various companies run bus services in Manchester: amongst them there are Finglands, Magic Bus, Arriva, Stagecoach, First, etc. The central bus station is located in Piccadilly Gardens. Almost all of the lines stop here. Due to there being so many companies, the price of the tickets also vary.

Each company offers various types of daily tickets, hence why the prices vary.

Weekly ticket: each company offers its own weekly tickets, with prices from 10 pounds.

Operates from the centre of Manchester to Bury (North of Manchester), Atrincham (South) and Eccles, going through Salford Quays.

It runs every 6-12 minutes. The tickets can be bought in machines at the stops and are valid for 90 minutes from issue.

The price of the ticket depends on the area.

What to see in Manchester Ideal for students that want to combine their studies with their free time, by sightseeing and enjoying the city

The objective of the course is to improve the knowledge of grammatical structure and the skills of - speaking, istening, writing and reading. The lessons are designed to increase your confidence in your English use.

students that want to improve quickly

The structure of the course is the same as the standard course. The intensive course includes 1 more hour of class per day.

These modules of preparation of IELTS will allow you to prepare for the test with professors experts in the exam so that you can arrive with confidence the day of the test.

Students that need to prepare for the IELTS exam

The preparation course for IELTS is designed to help you get the score that you want in the exam. You will do practice exams and learn how to approach tasks and prepare effectively for the exam.

Make maximum progress during your stay abroad. Highly recommended for students who need to learn a language as quickly as possible for academic or professional reasons.

The College regularly organises events like going to the theatre, or Manchester United football ground, plus visiting museums. There are lots of things to do in Manchester. Living with a British family is a great way to improve your English while studying in Manchester. You’ll be practising your English at home as well as experiencing British culture. We try to match all students’ requirements to a family profile and all students receive a warm and friendly welcome in homes which have been carefully chosen by the school staff. Naturally it is not the same as living at home so students will have to adapt to life in England. Students will be expected to live as one of the family and this could sometimes involve helping the family with simple chores, like keeping your bedroom tidy, setting the table or clearing away the dishes after meals. Many students feel like and become one of the family and keep in touch with their host families for many years after their stay.

New residence with Premium features: High quality and decoration, all amenities, bedding, cleaning, gym, bowling, games room with billiards, karaoke, common rooms, fully equipped kitchen, private bathroom, large bed. Everything you need to make your stay comfortable. And only 7 minutes walk from the school. All in the center of Manchester and well located and connected, very close to Manchester Picadilly.

Availability: All the year

Deposit fee: Our students do not have to leave a deposit

The Aeropuerto internacional de Manchester is located 17km (10 miles) to the South West of Manchester.

There is a frequent train service from the airport to Manchester Picadilly Station, located in the city centre. From here, you can get everywhere in Manchester. The trains leave every 10-20 minutes, and the journey time is 20 minutes. It costs £2.65.

The taxi ranks are located in Arrivals. The taxi from the airport costs £25-30

You can also get to Manchester from Liverpool airport. The price of a bus ticket is £6-7.