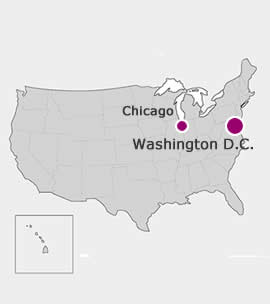 Our English school is located in the heart of Chicago, in the most popular district in the center of the city, the "LOOP". It is one of the most commercial areas, packed with shops, bars, restaurants and theatres, close to all the main public transport lines and parks located on Lake Michigan's commercial districts.

It has comfortable classrooms, an excellent location and first class facilities, and includes an extensive library of self-study materials, computer room and a student lounge. In addition, every week the school organises many activities and excursions in and out of the city.

Chicago, also known as the windy city and the second largest city (after New York), is one of the most culturally diverse cities in the United States and the world; more than 50 languages ​​are spoken. Just take a look at the annual calendar of ethnic parades and festivals to prove the multiculturality of the city.

Its architecture is one of its strengths, as it mixes several architectural movements such as Art Deco with the wonder of the great skyscrapers. Like all cosmopolitan cities, Chicago offers an endless list of attractions and rich cultural life.

Things to see and do in Chicago

If you learn how to use public transport in Chicago, you can move around the city for very little money. From 8am until 11pm there is a service, which includes buses, metros and trams. During the weekends and late at night it also runs but is less frequent. Travelling around the city by public transport is quick and safe. The subway, buses and suburban trains that travel through the suburbs and the "L" - a system of raised trains, are the public transport options to get around the city using CTA. In most stations of the CTA you can obtain a map.
Buses operate at frequencies ranging between five and fifteen minutes.
The single fare is $ 1.75.
The ticket for a full day is $ 5; For two days: $ 9; For three days: $ 12; For five days: $ 18

Things to do in Chicago

At night in Chicago

Neighbourhoods with the best nightlife are Loincoln Park, Gold Coast, Streeterville and Old Town (North Loop), Greek Town (west of the Loop) and new fashionable areas: River North, Wicker Park and Bucktown. Most bars close around 02.00 or 03.00 on Friday and Saturday nights, but the outside patios close at 23.00. The nightclubs open late and usually charge between $3 and $ 20 to enter, although at the weekend tickets are usually more expensive. The price of drinks varies according to where you are; a beer is usually around $ 4 and cocktails $8.
The minimum drinking age is 21.

Chicago has many things to offer! Check out the local tourism website for more information: http://www.choosechicago.com/

»Want to know more about studying in Chicago? Contact us

Class in the morning or afternoon

For this course, Visa F1 is NOT required

Ideal for those that want to have enough time for their studies and also enjoy their free time visiting the city and sightseeing.

The English course has a minimum duration of 2 weeks with 3 hours of English classes per day, 5 days a week. The rest of the time is for other activities such as sightseeing, participating in social events at the school or staying with your new friends.

A combinaton of a Standard course of 20 lessons per week + 7 structured study sessions: these sessions will help you to reinforce what you have learnt and improve in areas that you need to practice the most, using books, language exercises online and interactive programmes.

The Semi-intensive English course focuses on 4 principal aspects of the language: reading, writing, listening and speaking. You will also learn vocabulary and grammar, how to speak in formal and informal discussions, interviews etc.

This course is a combination of a general course of 20 lessons + 8 lessons of specific skills (including vocabulary, culture etc) + 7 structured study sessions which will help you to reinforce what you have learnt and improve in areas that you need to practice the most, using books, language exercises online and interactive programmes.

The objective of this course is to reach fluency in English, learn grammar and vocabulary and use these in daily conversations.

Course duration: from 4 to 16 weeks
F1 VISA is required

This course is ideal for students interested in getting the TOEFL title. It is the most popular exam for spoken and written English in North America.

The course will give you academic skills and a level of English that you need to be prepared for the exam. You will practice reading, writing, listening and speaking, as well as practicing exam style questions and doing simulation tests. You will get used to the model of the exam, its structure, practicing and improving your level.

The school organises many activities for students, such as: tours, concerts, skating, full day or half day trips to all surrounding attractions, such as Millennium Park.

Participating in activities is not mandatory. However it is the perfect way to practice your English and meet new friends.

Family with half board

Homestay accommodation is ideal for students who want to immerse themselves in a different culture. By sharing meals with your hosts every day, you'll benefit from speaking English in relaxed, natural situations. All homestays are carefully selected to provide a safe and welcoming home environment. To get from the family home to the school, you need to get public transport. The duration of the journey is 30-45 minutes.

How to get to Chicago

The Chicago O'Hare International Airport has direct flights to Europe.

The companies that fly from Spain to Chicago are:

From the airport to the city:

The nearest train carries passengers to the center and there are lines that go to neighbouring towns.

Taxi ranks are in the arrivals terminal.

The bus line Continental Airport Express departs from each terminal to the centre of Chicago and other destinations.
The company Chicago Transport Authority Bus takes you to the centre.

In all terminals there is transport information. The duration of a taxi ride to the financial district is 30 to 45 minutes.